Retailer incentive comics are an interesting phenomenon. With modern comic books so prevalent (as far as typical print run), publishers invented these “artificially” low print run comics, specifically to “create” collectibles that would be sought after — which were used to lure comic shops into placing non-refundable orders. In the case of the Spawn #1 black and white edition, it was a retailer incentive attached to Spawn issue #65: buy 50 copies, get a black and white edition!

Looking at Spawn #1 from the point of view of a comic book collector, one would certainly want to own a copy of the comic book featuring Spawn’s first appearance… It is a “key” book, but, the existence of a million copies out there (direct edition copies, that is — I’ll get into that distinction in a future blog entry) hardly makes Spawn #1 a rarity. Without the scarcity factor, collectible value cannot follow, because supply will always overwhelm collector demand.

Spawn fans, seemingly desperate for something rare with a “Spawn #1” on it, have instead been drawn like a magnet to the “Black & White Edition” as their Spawn #1 collectible of choice, bidding up the value to astonishing numbers, including a recent sale at $249.99 for a VF/NM copy as screencaptured below from eBay’s completed listings page. At a budget of $250/copy, if one wanted to acquire all 3,100 copies (hypothetically speaking of course), it would require one to spend $775,000. That’s quite a lot of implied value ascribed by collectors to this issue. 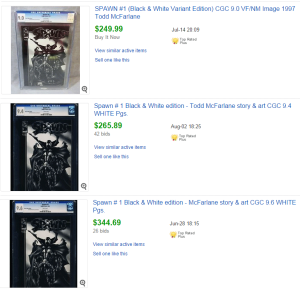 Recent eBay sales of Spawn #1 Black and White Edition include a VF/NM copy at $249.99

When you see a VF/NM copy sell for a penny shy of $250, it begs the question: why are collectors paying such prices? Here is my answer. As discussed on RecalledComics.com (another great collector resource), the “Black & White Edition” of Spawn #1 was a retailer incentive variant — as an incentive to comic shops to order 50 or more copies of Spawn #65, shops were offered a copy of this special variant for every 50 copies of Spawn #65 ordered. Based on this 1-in-50 rarity, we can extrapolate the likely number of Black & White edition copies in existence, if we know the sales numbers for Spawn #65. And for that information I turn to the Comichron monthly sales data page, where we can see Spawn #65 tops the charts at over 165,000 copies ordered. If every block of 50 out of that 165,000 also came with one Black & White Edition copy, that would imply a total maximum count of 3,300 copies. Because some comic shops may have ordered less than 50 copies, it is reasonable to take that number down some. RecalledComics estimates 3,100 copies, which I think is perfectly reasonable. Another piece of rarity information: as of this writing, there are 449 copies of the Black & White Edition on the CGC census (i.e. that is how many copies collectors have submitted to CGC for grading and encapsulation).

A print run of 3,100 is quite a lot lower than a million, which I argue is part of the explanation for the prices collectors are paying for copies of the Black & White Edition. I suggest that another part of the explanation, is how comic shops marketed their copies to collectors — giving them a complete education on the 1-in-50 rarity. By educating their customers about the rarity, the comic shops could sell them for the most money, right? But what about all the rare Spawn comics out there that the shops didn’t educate their customers about?

That’s where my blog aims to come in.

I say hold onto your $249.99, because there are lots of other highly interesting and rare Spawn comics you can find in VF/NM range condition at much more reasonable prices — even if we take that 249.99 amount and move the decimal place one over to the left as our budget. That’s right, with this blog my goal is to profile Spawn comics that are not only demonstrably rare, but can be purchased for under $25 in high grade. Rather than being an exhaustive list, it will just be examples of my own choosing, but each one will be rare and interesting in some way. Each blog entry will profile one particular comic. I’m going to cover a 1-in-100 variant of the original Spawn #1 that you probably didn’t know exists, a rare variant of a classic Frank Miller / Todd McFarlane collaboration, plus, I’m going to cover a “#1” that — based on the sales numbers data — has an implied total print run that is on the order of less than 400 copies (the entire print run is fewer copies than the number of CGC graded copies of the Black & White Edition — and yet I paid $12.65 for my copy).

Thanks for stopping by, this is a work in progress but check out my current list of profiled Rare Spawn Comics under $25!